Mum’s manufacturing trail adventure is based in small villages in India, South Africa and Bolivia. All stages of manufacturing, from the acquisition of the material and its processing to the finished product, take place close to each other. Then we talk about local production.

We have a village of weavers and there skilled workers. There are sheep that these people graze as an additional livelihood. Wool is locally produced for the Mum's carpets, for example. The village is surrounded by plants and herbs which the villagers pick to dye the wool naturally. Everything is made in the same hands, in the same village.

An ethical production has a great impact on the well-being of many people and the environment, even though the cargo of the finished product to Finland is long. 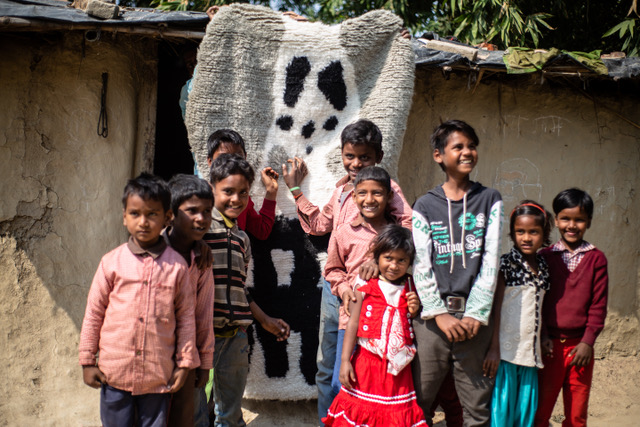 Local production is the heart of Mum’s manufacturing. All manufacturing, regardless of country, is based on the fact that people are employed fairly and materials are sourced specifically locally and nearby. Natural material like wool is always local so far that the villagers graze the sheep themselves, from which the wool is used on Mum’s rugs and home decor. In addition to India, we have production in Africa, Bolivia and Cambodia and we do the same in all countries. Close, handcrafted and meticulous.

We never use power-produced wool or imported wool. We take care of the local sheep, which the villagers shear . Wool is taken to the village on bicycles. Our wool is dyed in the same village traditionally, by hand, using locally collected plants and harbs to create natural ecological colors. The plants are also collected briskly on foot.

A lot of Indian carpets and clothes are made from imported wool and cotton. Imported wool is bought in bulk at the stock exchange price and in order to reach India, the wool has already traveled a long way from China, Australia or New Zealand. The carbon footprint of wool is unfortunately deep and heavy and thus also ethically, also ecologically, dubious. The same suspiciously heavy carbon footprint enters the picture in the manufacture of both clothing and home furnishings.

In her debut nonfiction book I Love and Hate Clothes (2021) and in her Green Clothes blog, Anniina Nurmi writes about the harms of power production:

“Raising animals requires a lot of land, natural resources, energy and water. Herds of sheep on huge farms cause erosion and loss of biodiversity. Sheep farming generates large amounts of methane emissions, which exacerbate climate change. In large sheep farms, living conditions are often very poor and animal mortality is high. Power generation uses a lot of chemicals to evict parasites. When poorly treated, these harmful chemicals can enter the environment. Pesticides are also harmful to human and animal health.  Raw wool contains a lot of impurities and grease. Washing a wool requires a lot of water and a high temperature to separate dirt and grease from the wool. Often, wastewater is insufficiently treated, which puts a strain on water bodies. ”

Local production is important for many reasons not just because its accountability is manageable.

1. Mum's local production is small-scale, and manufacturing does not require a large area of ​​land, a lot of energy let alone water.

2. Our sheep wander free. To ensure parasitic control, pastures are recycled every six months. The pastures are plowed and allowed to hay at times, because in long hay the parasites hardly thrive.

3. We do not use pesticides or chemicals at all. We wash the impurities in the raw wool in lukewarm water several times. The washing takes place in a washing room built for it, from where the water is led directly to the sewer. 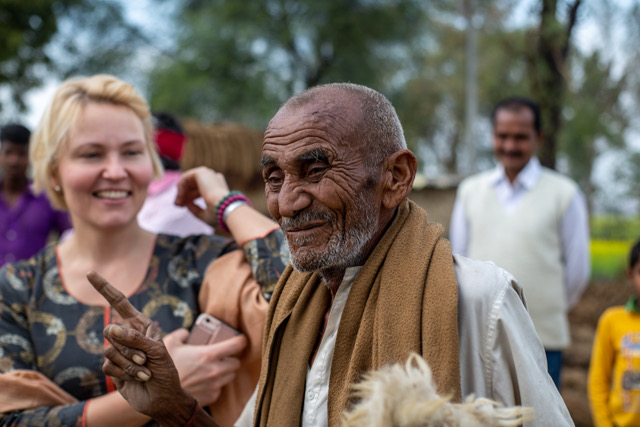 Wool is a magically fine material. Did you know, for example, that wool can absorb moisture from its surroundings up to a third of its weight? Moisture is absorbed into the internal structures of the wool fiber and therefore the wool does not feel wet or cold against the skin in the sweater or wool socks woven by your grandmother.. When wool fiber absorbs moisture, it also repels liquids. For this reason, the liquid forms droplets on the surface of the wool that are easy to wipe off before a permanent stain forms.

Wool is a biodegradable material and it also has an improving effect on indoor air quality. It is able to absorb, for example, the smells of chemicals and harmful air pollutants that may be present indoors. Natural wool is also durable. Usually, vacuuming or ventilation is enough for a wool rug, just like for a woolen sweater. Fewer washes means less water consumption, and less electricity. Our environment is grateful.

Thank you for the sheep derar nature. You are super!